Building the Ladder to Success

Under the Alumni Development Programme, TCF alumni are teaming up with spirited volunteers to create unprecedented opportunities for the TCF students following in their footsteps. In doing so, they demonstrate the promise and possibilities of the TCF movement.

More often than not, the road to success depends on knowing what you have to do to get ahead in life and then trying your best to do it.

This is something all those success pundits and speakers leave out of their feel-good narratives that are supposed to leave you full of inspiration and an inexhaustible drive. They will tell you stories of people who went from rags to riches after dropping out from school, the famous artist who went hungry for days, or the melancholy composer who dreamt of tunes under serious bouts of depression. After telling you these tales of hard work these pundits consider their jobs done.

‘The biggest difference in me? I now know what I have to do – there are thousands of other kids like me who are capable of doing much more but there is no one to steer them to the places where they too can have, at least an opportunity if not an equal chance of succeeding,’ shared Iqra Saleem, graduate of a TCF school in a remote industrial area of North Karachi who now studies finance at the premier Lahore University of Management Sciences (LUMS). She is now attending the Saginaw Valley State University in Michigan, USA for a semester through a scholarship from the US State Department’s Education and Culture Bureau.

Nadeem Hussain, another TCF alumnus, who initiated the Alumni Development Programme (ADP), knew exactly what was needed to build a ladder for students like Iqra, to access equal and fair opportunities in higher education.

Nadeem was born in a remote village of Naushehro Feroze district in Sindh. He was about six months old when his
father decided to move to Karachi to secure a better future for his children. 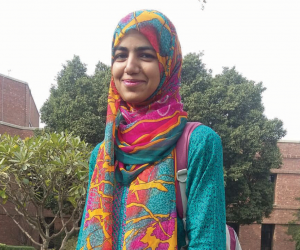 Upon the family’s arrival in Karachi, they discovered to their dismay that the area where they lived – right in the middle of one of the several industrial zones in the largest city of the country – had no school. If The Citizens Foundation hadn’t opened its campus in his community, Nadeem probably would have never seen the inside of a classroom.

Nadeem is now a Technical Assistant for the World Bank. Having worked his way through Intermediate to the Institute of Business Administration (IBA), Nadeem set an example for his younger siblings.

‘Kids like me don’t even have access to basic facilities such as the internet which a ‘normal’ young adult now might take for granted. We don’t know what doors could be opened forus and what we need to do to open them. We go to school and then college and mostly that’s it for us. Intermediate is not enough to secure a good job and thousands of other kids like me don’t know what else we can do to look for more opportunities,’ said Nadeem

Till about three years ago, if anyone had told Imran Shaukat that he would be studying in one of South Asia’s top universities, he would not have entertained the thought.

‘I had not even heard of the Institute of Business Administration! I was an auto mechanic in a small village just off Northern Bypass in Karachi. I had completed my Matric and worked at a repair shop every evening after studies because it added an extra Rs. 2,000 to the household income,’ he said.

One afternoon in 2013, just after he had completed his Intermediate, Imran received a call from a founding
member of the ‘TCF Ambassadors at IBA’, asking him to consider attending preparatory classes for the University’s admission test.

‘It is not just my life that has changed. This opportunity has reshaped my family’s future too. My father remains ill most of the time, so it has been my mother who has toiled as a domestic worker all her life to feed me and my three siblings, and to keep a roof over our heads,’ says Imran, who now studies in IBA’s Computer Science Programme.

Meanwhile, feeling that reputable universities of the country were becoming saturated with students from privileged backgrounds, the Dean and Director of IBA at the time, Dr. Ishrat Husain offered his patronage to ‘TCF Ambassadors at IBA’, led by Nadeem Hussain and Farheen Ghaffar, which has now evolved into a more structured TCF Alumni Development Programme (ADP).

‘Such students not only change their own lives but also the fortunes of their families and by default, also become role models in their own communities,’ commented Dr. Ishrat. ‘For them the struggle is much harder but they are also more determined than students who are relatively well off, because they have much more at stake.’

One such student is Iqran Rasheed, a resident of Goth Dhani Bukhsh near the Karachi airport who is majoring in Communication Studies and Design at Habib University (HU). ‘If the TCF-ADP team had not called me, it would have been impossible for me to even think of applying at HU,’ shared Iqran. ‘I remember that time… my whole future was at stake. I would get to the library at 8:00 in the morning and stay there till 8:00 in the night’.

What the programme has also achieved is an effective zero-cost model that is entirely dependent on the time and tutoring services of undergraduate university students.

‘All we use are old books of IBA students who also donate their time to teach students. Some do it because they like what they are part of while others do it to meet a social internship requirement,’ explained Nadeem. ‘The TCF Ambassadors model has now been replicated in two other universities besides IBA: Habib University and Institute of Business Management (IoBM), where our students are receiving a high quality education. The cause is led by people who have been through the system so they own it.’ The TCF-ADP runs purely through volunteers who head different portfolios of the programme. The ADP team is careful in its selection of volunteers and many of the people doing the work on the ground are people who are direct beneficiaries of TCF’s mission of removing barriers of class and privilege from education.

‘No one understands the entire programme better than us because we are its products,’ said Iqran who now leads the TCF Ambassadors team at Habib University. 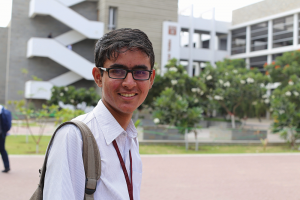 Another student of IBA’s BBA Programme, Asad Sajid, makes the two-and-a-half-hour commute from his home in Geedar Colony in the city outskirts every day. ‘I’m a TCF alumnus and the background TCF students come from is different from the backgrounds of most students here,’ he admits. At the same time, he feels entitled to be at IBA and fully experience what other students are experiencing. Asad now hopes to pursue Human Resource as his degree major and study further. After graduation, Asad aspires to enrol in the MBA Programme at the Wharton School of the University of Pennsylvania. He knows he can make it that far because he has worked very hard to get where he is. He knows now that he can manage whatever life sends his way. 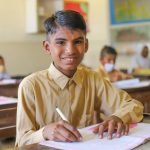 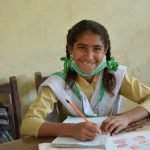 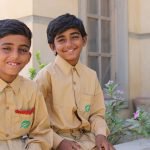 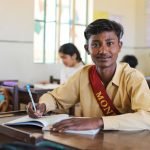